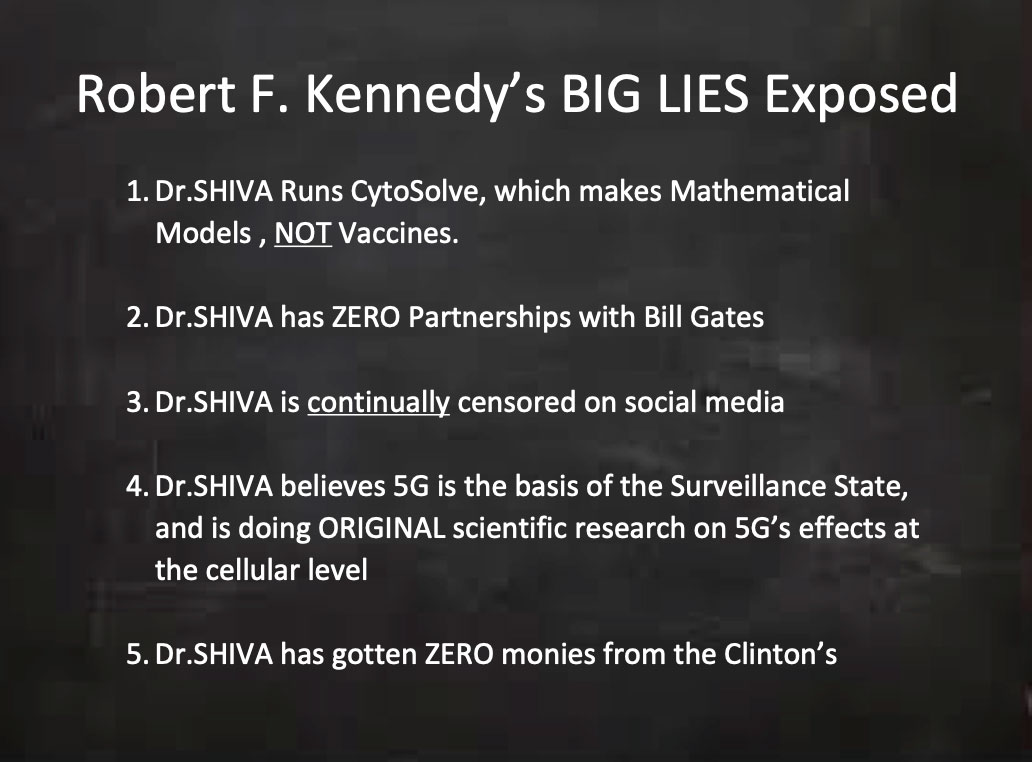 CytoSolve is not a “Vaccine Maker,” has never produced a single Vaccine. CytoSolve IS a software technology for modeling biological mechanisms. CytoSolve IS recognized as a Revolutionary and Disruptive Platform. CytoSolve MAKES Mathematical Models. CytoSolve DOES NOT MAKE Vaccines. We invite any and ALL Pharmaceutical and Vaccine Manufacturers to come to CytoSolve and test their drugs or vaccines for safety and toxicity, BEFORE, they INJECT IT INTO YOU. Any takers? Robbie?

I hear only crickets….

Challenge to Robert F. Kennedy, Jr.: Please send us the evidence that CytoSolve is Vaccine Manufacture. We would love to know WHO in our organization is doing this. Robbie – Please call me at 617-631-6874 to let me know, so I can fire them.

Neither Dr.SHIVA nor EchoMail nor any of his companies have “partnered with Bill Gates”

Challenge to Robert F. Kennedy,Jr.: Please send us the evidence that Dr.SHIVA or any of his companies are in partnership with Bill Gates. Robbie – Please call me at 617-631-6874 to let me know.

Robert F. Kennedy, Jr and his minions are SO jealous that Dr.SHIVA’s Truth Freedom Health message is resonating globally while Robbie’s bullshit is being exposed. Moreover, the truth is Dr.SHIVA’s followers should exceed 10 million by now. He was shutdown on Twitter on 3 occasions sharing information of Vitamin C and Vitamin D – all documented. His videos on YouTube are throttled regularly and some have just disappeared. Facebook and Instagram have removed various posts and put the CDC warning on them.

Robbie – Please call me at 617-631-6874 so I can teach you how telling the truth and educating people can actually get followers.

Robbie – Please call me at 617-631-6874 if you have any biomolecular mechanistic information on the effect of 5G.

Dr.SHIVA has not received a penny from the Clinton’s. As an MIT PhD Graduate Student in 1992-1993, Shiva won First Place in an industry-wide contest sponsored by the National Institute of Standards (NIST) and the Executive Office of the White House, to automatically categorize email.

He has not received a single penny from the Clinton’s. If Robbie can track this down, my accountants and I would love to know, or STFU.

Click Here to Learn All the 5 Facts and 5 Big Lies of Robert F. Kennedy, Jr.